August 30, 2014
I wrote The Push-up Experiment earlier and got enough responses asking about the nerdy parts that I'm now writing this one. So, buckle-up and hold on, this could be a long nerdy ride.

Here are the tools that I used with links: 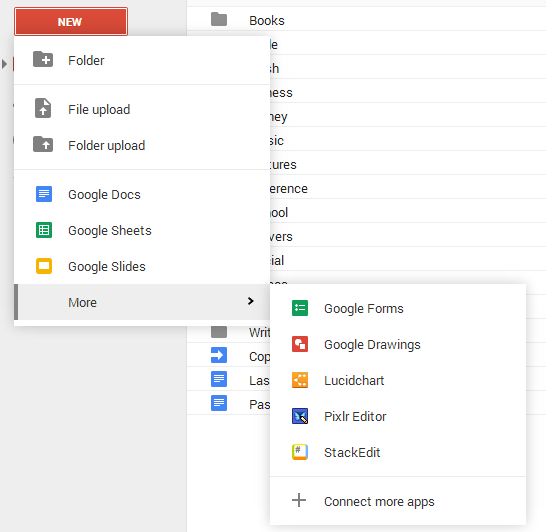 Google Drive allows you to build surveys and send them out; it's called "Google Forms". Your drive options might look a little different than mine but here's the gist of it. Create a new form and make a question for it. For the push-up survey I simply asked "How many push-ups did you do?" and left it as a "Text" type question. When you do this it shows up as a simple text box on the survey and when opened on the phone brings up the keyboard. One other thing I did was only allow for numbers to be entered into the text box because obviously I can't do "abcxyz" number of push-ups. This also has the added benefit of simplifying the Android keyboard so that it only displays the number keys; a simple thing but it makes life just that much easier. 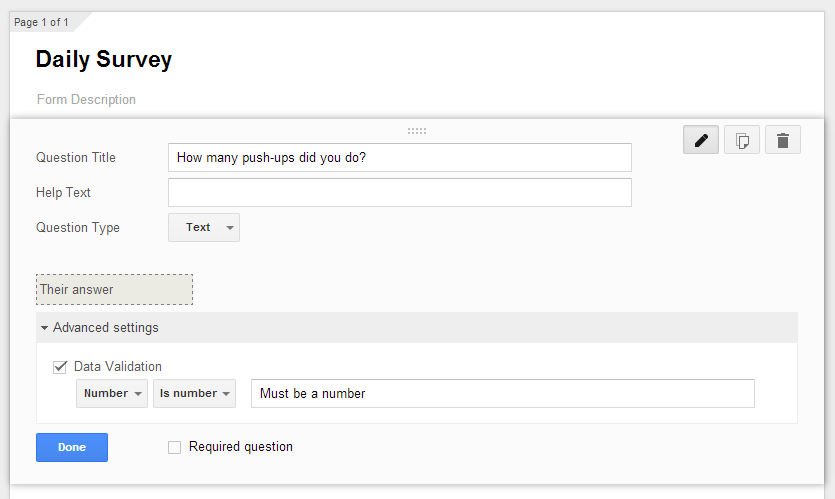 When you're done with your form click the "Send Form" button in the top right and copy the URL from the dialog box, you'll need this later. Google will now take any results from this survey and drop them into a sheet that has the same name as the survey with "(Responses)" after it. It will also time stamp every response. It's inside this sheet that I set up the graph. I chose an easy to read area chart but you can play with that to make it fit with how you want it to look. After your chart looks good you can publish it which gives you two options "Interactive Chart" and "Image". I'm a fan of the image option but it doesn't really matter which one you go with honestly. Now that you've done that you can copy/paste that embed into any web page or you could probably get creative tweet it out or whatever, sky's the limit! Alright, now that we've got this all set up there is on more important thing to do, remind yourself to do push-ups and make it easy to record that I used IFTTT for this.

This part isn't too hard but it could vary greatly depending on a couple things: 1. Android or iPhone and 2. the notification service. I've got an Android phone and I'm using a notification service called Pushover but IFTTT works with a lot of notification services (they even have their own app for Android and iOS) so you don't have to use Pushover. Regardless the steps will be basically the same.

If you're not familiar with IFTTT be warned, it can be a little overwhelming at first but once you dig into it a lot of wonderful uses start to come to mind. Basically it is a simple service that says when "ABC" happens on the internet trigger "XYZ" to happen. It has a list of triggers and a list of actions for all kinds of services like Twitter, Facebook, RSS feeds, Reddit, so many more. As a silly example you could have it post a tweet on your behalf every time a Craigslist ad goes up matching the search term "shopping cart". Enough about that, let's get back to the task at hand: reminding us to do push-ups.

Using IFTTT I created a new recipe that triggers every day at 6:45 and when that fires it sends a Pushover notification with the URL to the survey we created earlier. The trigger is under the "Date & Time" channel and I selected "Every day at..." then just put in 6:45 and go to the next step. Select the Pushover channel (or whatever notification service you're using) and in the step after that paste in the URL for your survey. Finish off your steps for creating the recipe and you're done! You'll now get a notification every day with a link to your survey and the results from that survey will go into your Google sheet to be graphed and automatically published wherever you included the publish code.

Yes, this is a bunch of work and a lot of weird tools that may or may not have been created to work with each other but it was a fun problem to solve and now I have an image that I put anywhere and it will always show my most recent push-up progress. What other things can you think of that this might be useful for?

Popular posts from this blog

January 12, 2013
I've been thinking about doing a lot of different things lately. I've been wanting to learn the violin, go rock climbing, start a side business, and drive to the west coast, just to name a few. I'm not exactly sure where these urges started or why they're just now coming up but it seems that something in me is stirring. Part of this may be caused by my age; I'm not old by any means but in October of 2012 I turned 30. I've been living in the same house working at the same job for roughly 8 years now and I wonder if I'm starting to feel like I'm letting life pass me by. I'm sure this is a very normal feeling around my age and probably every milestone birthday from here on. I want to make sure that when I hit 40 I don't think to myself, "What did I do for the last 10 years?" I want to be able to look back and say "Wow, look at all the fun I had, the people I met, and the work I accomplished." I'm going to start right now,
2 comments
Read more

My Life After LastPass

March 02, 2013
I'm sure this post is going to feel like a commercial and I'm fine with that. :) A friend (who will remain entirely anonymous) posted a light-hearted jest on Facebook about some password requirements being insane and asking about ways to make up a password that worked within these particular criteria. All of the usual suggestions came up: take a normal password and change some letters to numbers, the algorithm that you remember that turns the url of the site into a password, XKCD's awesome method at http://xkcd.com/936/ , and I mentioned LastPass . At this point I hadn't used LastPass, only heard about it and thought it would solve his problem. LastPass is a secure password management tool that will generate (and remember) new passwords for anything you want. The passwords tend to look something like this "bQ0SCNPS7Q1c" and are encrypted and stored locally as well as on their servers so that you can access them from anywhere. Your master password is the ke
1 comment
Read more

August 27, 2014
Disclaimer : This is a work in progress, I'm mostly curious about what you think about this idea. Also, sorry about the wall of text. As a software developer, I try to identify places were technology can help people. I've had many conversations with a few people about how the education industry is on the cusp of a large reform because of the Internet. I'm not sure if that's true but I'm going to act like it is for the sake of argument at the moment. Many people believe that this is going to come in the form of a centralized education platform or standard that delivers online education. We're already seeing things like this, Kahn Academy ( https://www.khanacademy.org ) and Lynda ( http://www.lynda.com ) are two excellent examples. I'd like to look at how technology can help education from a different perspective because I think the idea of online education (or eLearning) is flawed in one very serious way; it completely ignores the human aspect of learning
Post a Comment
Read more