March 12, 2013
When I tell people that I bought a webcam it almost always illicits a, "what the heck kinda creep are you?" reaction. I'm going to assume that I'm a fairly non creepy person and that it isn't because of my personality that people think this (I may, however, be completely wrong). I completely understand the inherit fear people have of webcams because it means that, if I wanted to, I could record and post everything on the internet that happens within the private walls of my house. I wouldn't do that because that does sound creepy but none-the-less I have a webcam.

There was a day in the fall where I accidentally left my girlfriend's dog (Ricci) outside all day while I was at work. I felt so bad because I had neglected him and, worse of all, didn't even realize it happened until after I got home. Now, this wasn't an issue because it was spring and a beautiful day, but it sets me up for a worrisome day that winter.

It was especially cold one day and Ricci asked to be let outside before I left for work. I won't leave you in suspense, I let him back in before I left. The problem is that, for the entire day, I couldn't remember for sure if I had let him in or not. I worried about it all day and if it wasn't for back-to-back meetings that day I would have taken off to make sure. I let it get to me so badly that I bought a webcam that day before I left for home. I knew that it wouldn't help me now but it would allow me to solve this worry in the future and that piece of mind was worth so much to me in the moment and I have never been in the same situation since. 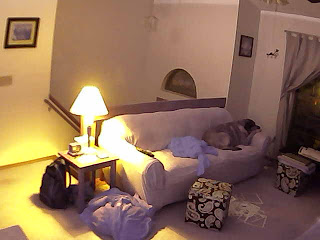 The best part about having the webcam is that I set it to take random photos periodically and upload them to my private FTP server. So far these photos have been very boring, but there is some fun at going through them every now and then to see my life as captured by a 3rd party. As an example, to the right is a fairly uninteresting photo taken by the webcam at 6:15 AM on the morning that I wrote this. You can see Ricci staring longingly out the window and a few bits of "teacher scrap" left on the floor from the night before.

I've been enjoying the webcam because it's nice to know what's going on in my house but it is also an interesting conversation topic. Ashlee loves to ask people if they want to see her puppy and proudly pulls up the live stream on her phone. The only problem with webcams is that they can be very addictive; I think I want a few more, is that creepy?

Popular posts from this blog

January 19, 2013
@PhilCorbettLive - That is my live auto-blog twitter account, feel free to follow it if you like but be warned. As an experiment, anytime an app or website asks for permission to post to Twitter for me I say "yes" and point it to this account. I've also used  ifttt.com  to push as much as I can to this account. The experiment is not scientific in any regards but more of an observation at the amount of data that I am constantly making by using various services. There is also a curiosity about what an account would look like if you were to grant access to post on your behalf for anything and everything that asks. For reference, my live auto-blog was created September 1st, 2012 and in 140 days since creation this account has tweeted 939 times. Compare this to  @PureMunky (my real/normal Twitter account) which was created April 6th, 2007 which has in 2115 days tweeted 613 times. Now, I don't tweet all that often but the stark difference in my activity online an
Post a Comment
Read more

January 12, 2013
I've been thinking about doing a lot of different things lately. I've been wanting to learn the violin, go rock climbing, start a side business, and drive to the west coast, just to name a few. I'm not exactly sure where these urges started or why they're just now coming up but it seems that something in me is stirring. Part of this may be caused by my age; I'm not old by any means but in October of 2012 I turned 30. I've been living in the same house working at the same job for roughly 8 years now and I wonder if I'm starting to feel like I'm letting life pass me by. I'm sure this is a very normal feeling around my age and probably every milestone birthday from here on. I want to make sure that when I hit 40 I don't think to myself, "What did I do for the last 10 years?" I want to be able to look back and say "Wow, look at all the fun I had, the people I met, and the work I accomplished." I'm going to start right now,
2 comments
Read more

My Life After LastPass

March 02, 2013
I'm sure this post is going to feel like a commercial and I'm fine with that. :) A friend (who will remain entirely anonymous) posted a light-hearted jest on Facebook about some password requirements being insane and asking about ways to make up a password that worked within these particular criteria. All of the usual suggestions came up: take a normal password and change some letters to numbers, the algorithm that you remember that turns the url of the site into a password, XKCD's awesome method at http://xkcd.com/936/ , and I mentioned LastPass . At this point I hadn't used LastPass, only heard about it and thought it would solve his problem. LastPass is a secure password management tool that will generate (and remember) new passwords for anything you want. The passwords tend to look something like this "bQ0SCNPS7Q1c" and are encrypted and stored locally as well as on their servers so that you can access them from anywhere. Your master password is the ke
1 comment
Read more